Local advocates are doing everything they can to save the largest remaining wetland in Dartmouth and, with it, an important sliver of democracy.

Wetlands are vital to our environment and our communities, now more than ever before. Eisner Cove Wetland and the surrounding forest are rich in plant diversity and offer important habitats to many animals, including foxes, otters, Northern cardinals, and owls. But this area is in imminent danger from the government of Nova Scotia, which has offered it up to Clayton Developments on a silver platter.

For decades, wetlands have been one of the unsung heroes in the fight against climate change. Now that we know that wetlands are masters of carbon sequestration, we must do better—for our wetlands, our neighbourhoods, and our climate. If our wetlands are disturbed, they will not only stop sequestering carbon, but also emit all that carbon they’ve stored for hundreds or thousands of years into our atmosphere.

Even though the provincial government has been bragging about fast-tracking developments in wetlands and old forests, Nova Scotians remain concerned about the lack of meaningful consultation, proper planning, and ecological considerations.

“For any future politicians out there, if you ever find yourself asking ‘Why do people not vote,’ simply look at the way that John Lohr and Tim Houston slapped democracy in the face, taking the decision out of the hands of the public and placing it in the hands of 5 unelected people,” wrote local advocate Bill Zebedee. 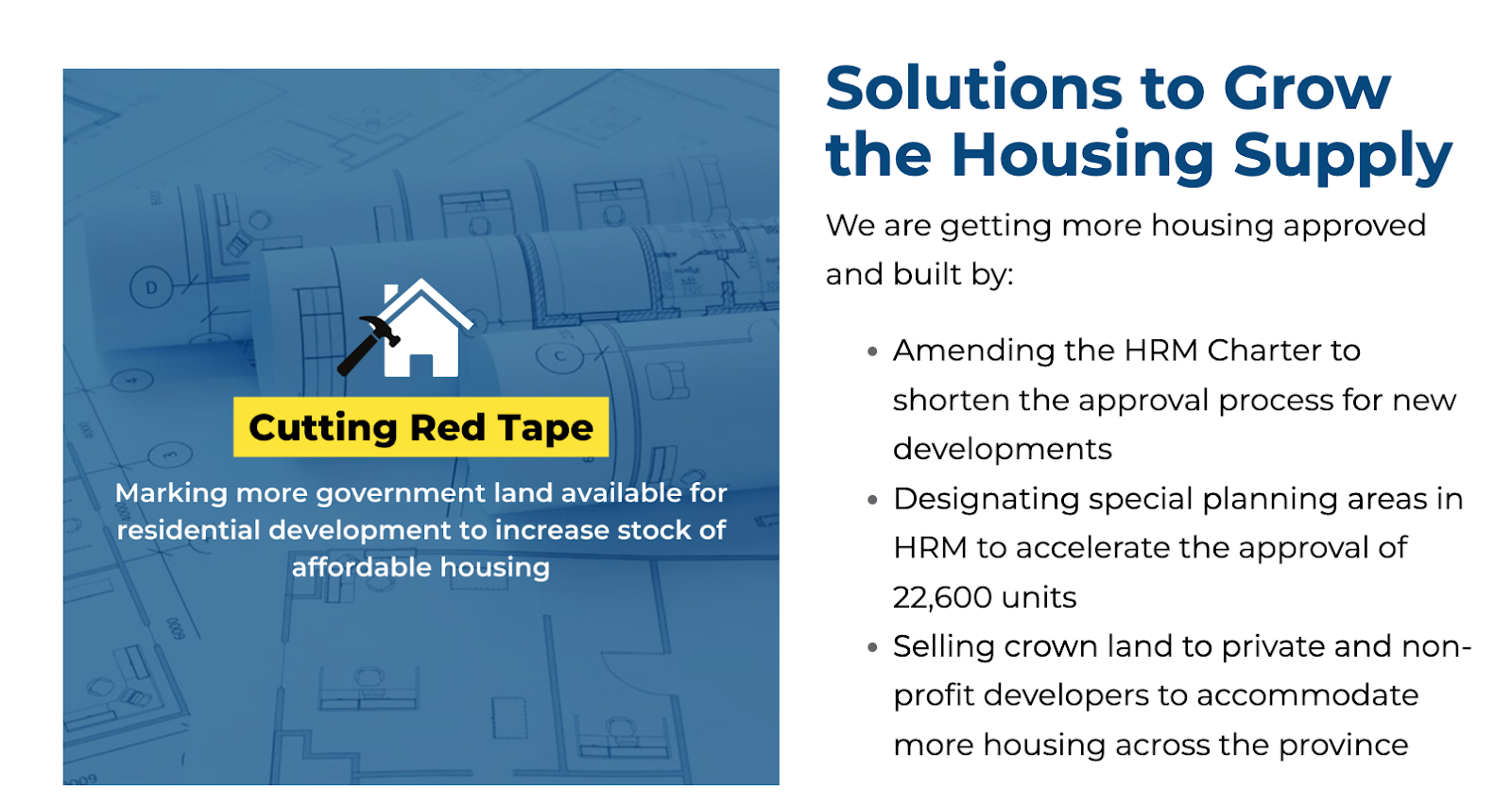 “Solutions to Grow the Housing Supply” is a screenshot from the PC Nova Scotia website.

The province’s Executive Panel on Housing is a real threat to the democratic process. The Panel is rubber-stamping inappropriate developments across HRM under the guise of affordable housing. Eisner Cove Wetland, Sandy Lake, Port Wallace, and Blue Mountain Birch Cove Lakes are just some of the sites the Executive Panel has in its crosshairs. (Between December 2021 and March 25, 2022, 41 potential developments were brought before the province’s HRM housing task force for consideration.)

The proposed development at Eisner Cove Wetland—and the shadowy process behind it—should be raising serious concerns about government transparency, sustainability, and accountability. As journalist Joan Baxter wrote, “Here in Nova Scotia, the handing over of enormous amounts of power to a small group of people hand-picked and appointed by the provincial housing minister — a group of people whose meetings are all held behind closed doors — seems to have evaded serious scrutiny.”

Not only is the government of Nova Scotia intent on infilling the wetland, but it’s also forging ahead before species at risk can be appropriately assessed. “It’s basically been a steam roller,” retired biologist David Patriquin says.

Fast-tracking developments in order to appease private interests doesn’t inspire much trust in the government’s ecological assessment. After all, the provincial government also said there were no occurrences of species at risk at the Last Hope Camp in Southwest Nova Scotia. Biologists from the Department of Natural Resources and Renewables never even set foot in the forest before making the assessment. But citizens on the ground identified 17 occurrences of species-at-risk lichens in that same forest.

“It has become apparent to me that this development has already been pre-approved as originally presented,” said Former HRM Councillor Peter Lund. “The legitimate issues expressed by knowledgeable citizens and professional scientists over the past few months are not being addressed nor responded to by the decision makers. Backroom deals win again.” But local advocate Bill Zebedee remains steadfast: “Our voices will not be silenced.”