What is Energy Democracy?

For starters, it’s based on these principles:

Caring for the environment

Energy democracy empowers ordinary citizens to participate in the energy decisions that affect their daily lives.

Currently, most of us don’t have any say when it comes to how the electricity we use is generated. In Atlantic Canada, not enough is being done to phase out fossil fuels. At the same time that elected leaders are pledging to reduce our greenhouse gas emissions, they’re dragging their heels on the shutdown of coal or promoting offshore oil and gas, natural (fracked) gas, and—more recently—small modular nuclear reactors.

The big power corp executives and lobbyists have a seat at the table with government and wield considerable influence; members of the public are led to believe they, too, have agency, through a form of political theatre known as “public consultation.”

Energy democracy flips the energy oligarchy on its head.

How? Energy democracy is based on community ownership. This can take the form of a municipal electric utility or citizen- and worker-owned energy cooperatives, with lots of room for collaboration between the two. These smaller utilities and cooperatives can choose to work together, as Antigonish, Berwick, and Mahone Bay have done in Nova Scotia.

Community-owned utilities and cooperatives are leaders in the transition to clean renewable energies. They’re also better at addressing local energy poverty, and most provide better, more reliable service at a lower cost to customers.

Community-owned and operated utilities adopt renewable energies at a scale that works for the local area. Why? Because the people who own and operate them live there, too! That means smaller wind or solar farms rather than the huge industrial wind or solar complexes favoured by big power corporations. Under municipal or cooperative ownership, local citizens can also have a real say in where a wind turbine or solar garden is installed.

Energy democracy also means that community utilities employ local people at fair wages. Any profits stay in the community through: 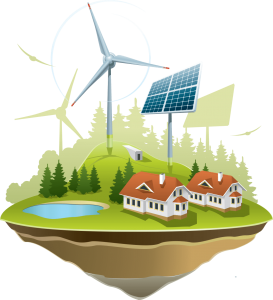 In the United States, electric cooperatives serve 42 million people across more than 2,500 counties in 48 states.

According to the National Rural Electric Cooperative Association (NRECA), its member co-ops “have invested more than $50 billion over the last five years to modernize their systems, preserve reliability and create a more resilient grid.” In 2019, America’s electric co-ops returned more than $1.3 billion in capital credits to its co-op members/customers.

The Nebraska Energy Association, which has 166 member utilities, points out that “Nebraska has the distinction of being the only state in the U.S. where every single home and business receives its electricity from a municipal utility, electric cooperative, or a hybrid community-owned model, known as public power districts.” Nebraska has one of the lowest outage rates in the country, even though a third of its population lives in rural areas. Nebraska’s power rates are also the lowest of all of its neighbouring states.

In Iowa, three electric co-operatives have joined forces to build a new local daycare facility. In Virginia, a local electric co-op has managed to bring broadband internet to the rural communities it serves. In Colorado, an electric co-op helped the disaster-prone mountain community of Red Feather Lake build a microgrid, so that it’s less likely to be cut off from electricity during wildfires and major snowstorms. The reason these co-ops can evolve to meet community needs is that they are built by—and belong to—the people and communities they serve.

Our Power to the People Campaign in Atlantic Canada

At Sierra Club Canada Foundation, we know it’s possible to rapidly transition to clean renewable energies, such as wind and solar. Sure, there will be days when “the wind doesn’t blow and the sun doesn’t shine,” but we can utilize low-cost innovations to store energy safely and reliably and reduce peak energy demand with new smart technologies.

Unfortunately, most big corporations—whether private or public—don’t have much interest in low-cost, community-scale renewable energy solutions.

The Power to the People campaign seeks to foster conversations about energy democracy in Atlantic Canada and connect people and communities that want to make it happen. We’ll also share cool resources and practical knowledge to help communities achieve their goals more quickly and easily.

Our vision for energy democracy calls for:

And you know what the best part is? Many of the building blocks for energy democracy are already right here in Atlantic Canada!

Nova Scotia has five municipally owned and operated utilities or commissions; New Brunswick has three, and Prince Edward Island has one. These community-owned and operated utilities are doing a much better job of reducing greenhouse gas emissions and leading the transition to wind and solar power. They’re also piloting energy storage solutions and supporting energy efficiency initiatives in their communities in a big way.

In addition, cooperatives are part of the fabric of Atlantic Canada and have a long history of supporting workers and communities. Today, there are more than one hundred cooperatives in the region—ranging from housing co-ops and credit unions to fishing and community forest co-ops. There’s even a wind farm co-op.

Still wondering whether energy democracy is realistic? Before you decide, ask yourself: Is it realistic to expect a multinational corporation that is beholden to its international shareholders to lead the way on a rapid transition to clean, renewable, and reliable energy? Do you trust the big public utilities like NB Power or Nalcor and Newfoundland and Labrador Hydro to deliver clean, affordable renewable energy any time soon—even though they’ve failed so far?

So what do you say?

If you’re interested in contributing to the energy democracy efforts in Atlantic Canada, contact us at Atlantic@sierraclub.ca